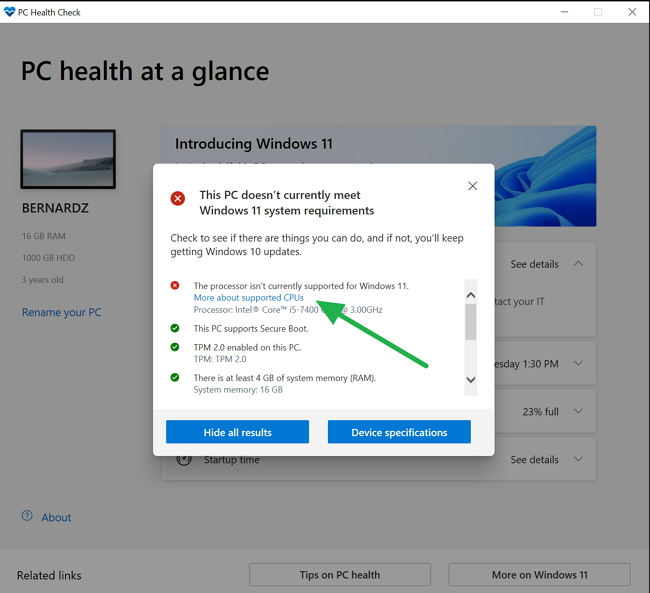 It is expected that Windows 11 will be released shortly on 5 October. Many of you will be given an automatic update and if you do not act will be upgraded.

I hope you listened to us and have not brought a computer recently that cannot run Win11. If so, all you have got is a dinosaur.

You can find out whether your computer is eligible for a free upgrade here.

See at the green arrow why this computer above cannot run it.

While you can hack these requirements, there are risks. Some computers have been kicked out of Win11 after a while.

We have tested preview editions of Win11 with our software, and several of our users have adopted it. We all have found issues. Not surprisingly, every site has different problems.

As a punt, I would say that over half the systems with Win11 have had to go back to Win10. Several of the others have had weird problems.

The major ones appear to be the start menu. In many systems, it goes crazy. We have no workaround for this, so we are reverting these sites to Win10.

Also, we find that Windows Defender is turned off in many systems in Win11. So computers are running with no virus protection. This can be fixed by reactivating it. This is something else after updating you need to consider.

Also, the Microsoft Teams program is suddenly appearing on a site. This forces people to stop in the middle of what they are doing and deal with this program! We find this Microsoft Teams program horrible. We used it before and found it unlike Zoom or Google Meet unstable so no one wants to use it, but it keeps demanding that we use it.  We have no workaround yet for this.

Now we are not sure what is the situation is with your other POS equipment. We expect that many will not work with Win11, but we cannot say for sure. So far, every major Windows update in this respect has caused such problems. This has resulted in people throwing out excellent equipment as they are no longer compatible with the new windows. So you are warned, go to Win11. You may need to buy new equipment.

Our advice is to consider Win7 when it took a while to work out, so we suggest that you wait till it is ironed out.

If you want to knockout Win11, see here.

Also, the function that everyone is waiting on is that your computer with run Android will not be available. This is something that we really want to include in our software.

Be Aware of Package Theft

The new touch screen models for 2021

Bad Wi-Fi, often you can fix it

Why you defer feature updates in Windows

How to use your data to have better stock control

Internet outages and your business